I am in France.

At any rate, once I got to Newark I bolted for my connecting flight. Unfortunately, it was way far away from my terminus of arrival (so to speak). Fortunately, I am way speedy, and I got there just as the last travelers were boarding the plane. Not to mention that Continental has some sort of system where your luggage somehow manages to get on your plane if you yourself get on it, and stay at the airport if you don’t, so my luggage arrived safely in Paris (and so did I).

Once in France I took the metro to the Gare de Lyon in central Paris, and then a four hour train ride on the TGV to Clermont-Ferrand. What’s strange is that I somehow managed to bump into Alex, a student who had completed an exchange at the University of South Carolina last year, on the train, which is bizarre considering he’s one of very few people that I actually know in France, and the only one who I have had any contact with during the past decade. So when we arrived in town at about 6:00 PM he walked with me to the school and I managed to find my temporary lodging; I don’t know how I could have managed that without his help before everyone went home for the night. The streets here are narrow and cranky and quaint (typically French).

I am staying temporarily at the Couvent de Bon Pasteur, an old convent from the 1600s that has recently been turned into a residence of sorts for certain types of students (including those who have just arrived on exchange). It’s a very cool place – I love locations with such history behind them. This morning at breakfast (which is provided free to residents) I met a sister at the convent who has lived there (for the most part) since 1941. Pretty amazing.

Afterwards some German students and I went out for dinner (pizza) and beer (1648), and I fell asleep at about 11:00, which is good considering it’s a step in the right direction toward eliminating jet lag. Today I went to the school and started getting my courses sorted out.

I must say that I am quite lonely and miss my family quite a bit, but I won’t complain about that too much here – suffice to say that I will be glad when they come to stay with me after I find a permanent residence and Amelia gets her American passport. It’s amazing how things change when you have a family and a home that you love; I can sort of understand how the soldiers in Iraq must feel, though of course their situation is much worse than my own as at least my life isn’t endangered every day that I am here. Nonetheless, it makes me appreciate what I have very much.

Off to a quick meeting with the Dean! 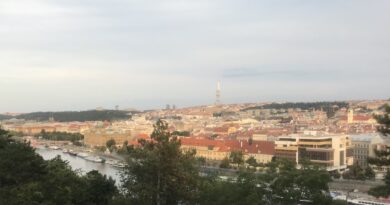 Getting a few miles in 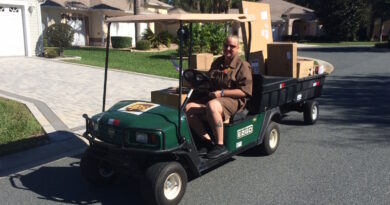 Only in The Villages