when I lived in Santa Clara, California there was a pizza joint down the street (within walking distance) called Pizz’a Chicago that I used to frequent quite often. They had a pizza (the Untouchables) that featured barbequed chunks of chicken, barbeque sauce and red onions that I liked a lot. So today I went crazy and made my own pizza – but I took Pizz’a Chicago’s basic three ingredients and kicked it up a couple of notches. At any rate – it turned out awesome! It was so great that I thought I’d share the recipe.

First I made myself a nice screwdriver (using Svedka vodka and Tropicana pulp-free orange juice) and got all of my ingredients in order.

Then I put some chopped asparagus and red onions into a frying pan and cooked them on a rangetop.

next, I cut up some breasts of chicken and cooked them on another rangetop. I used lots of spices. I grilled my chicken in Korean Stir Fry sauce with lemongrass, spicy Montreal chicken seasoning, Creole seasoning and garlic powder.

on top of the pizza crust and sauce I added several different cheese shreddings, the chicken, the asparagus, the red onions, some pepperoni, some chopped tomatoes and some Sticky Fingers Carolina Sweet barbeque sauce.

on top of all this I spread some more shredded cheese then sprinkled on some Parmesan, some more spicy Montreal Chicken seasoning and some more lemongrass.

I cooked the finished pizza in the oven for 15 minutes at 450 degrees.

and voila! It was pretty awesome. 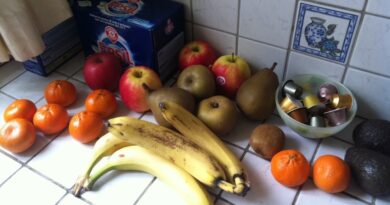